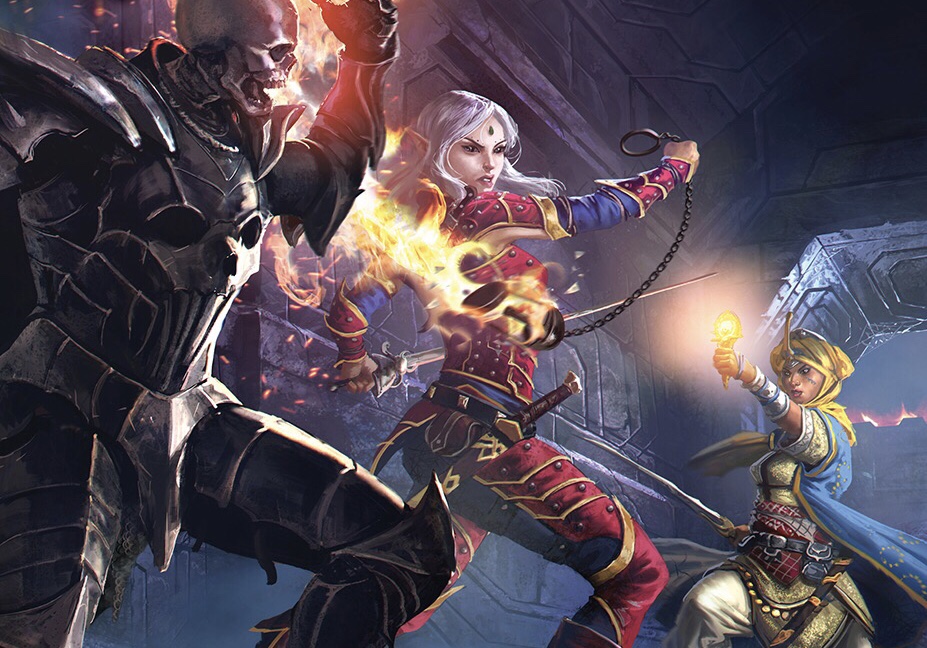 Hal’s light spell, cast on his comrade’s guisarme blade, illuminates off the shining metal fanned tail of an Emperor Bird. It is engaged in a fight with a Hellknight. The team react quickly and prominently display the insignia of the Order of the Nail on tabards they took from the level above and tied to their belts. The knight, who they can see is undead (a Hellcrown), acknowledges them as allies and together they concentrate their attacks on the bird.

Hal fires a Divine Lance spell at the Emperor Bird, which lights up the corridor in an aura of holiness.  Unfortunately the attack critically fails.  The card drawn from the crit fail deck causes the spell to hit the evil Hellcrown instead, and as the undead knight lands the killing strike on the bird, it then turns swiftly on the party.

((GM: Unbeknownst to the team, the Hellcrown also uses a psychic link to summon help from two nearby underling Crowns.))

((GM:  In the module, the gelatinous cube is confined to a room, waiting to attack.  I released it, so at the sound of the fight, it awakens from a cell where it has been resting, moves across the embalming room and into the tight corridor where the fight is taking place.

The cube retains the weapon inside it from the module, which, as is suggested in the module text, I switched the +1 battle axe for something suitable to John, the party tank, a +1 guisarme.

The cube is approaching the party like a moving trash compactor wall.  The corridor the team are in has one room, accessed through a slight alcove – and this is their chance of evading the Cube.  Should the Cube move beyond this point, the team will be caught between the Cube and the Hellcrowns, with nowhere to run.  As soon as the Cube reaches the corridor, I start rolling secret perception checks for the party to see if anyone sees the floating guisarme approaching from behind.))

((GM:  Hellcrown 1 is the leader and his presence allows them to fight as a military unit, once he is downed, the remaining two minions will revert to instinct and fight as individuals.  Hellcrown 1 is significantly damaged from the fight with the Emperor Bird and therefore aiming at him is the team’s best shot.))

John takes the front position, powerfully attacking the leader.  He hears clanking footsteps ahead in the distance, from where the corridor bends towards the dungeon on their map, and knows that reinforcements are on the way.

((GM: When the minions arrive, I have them make a salute gesture to the group leader, to give the hint that there may well be military tactics at play.))

John keeps power attacking the wounded leader and, with a weapon strike crit card, breaks the leader’s halbard in two.  The near-death leader fights on with gauntleted hands, in a final rage at the desecration of the Order’s heirloom.  He eventually falls.  Hax and Hal are a little removed and throwing spells that light up the walls in bright flashes.

((GM: At this point John is described as quickly turning to Hax and Hal to give a command … and therefore I allow him to see the floating guisarme (Cube) that is slowly creeping up.  It is three turns away from the alcove escape.))

John sees the floating weapon and alerts the team. It is moving slowly, hovering and they assume that it is a ghost. They decide to finish the Crowns, then take on the ghost.

((GM:  Each go, I move the “weapon” pawn one square closer to the team, visible to all of the players.  The Cube is stalking, thinking that the wounded team will be less bother.))

((GM:  At this point, another randomly placed creature – a second Emperor Bird – has heard the racket and is coming up behind the two remaining Crowns.  So two Crowns and one Emperor Bird ahead and the Gelatinous Cube behind.

The second bird will arrive in two more turns.  In my version, the Emperor birds have metal feathers that open up like a fighting fan weapon.  The bird’s Dazzling Display is therefore due to light reflecting off the quickly changing angles of the silvery metal feathers, instead of because of it flapping its plumage.

I have also given the Emperor Birds the characteristic of magpies, where they like to hoard shiny metal, fitting in with their metal fan tails.

Relic hunter Voz, who unknown to the party is their enemy, has unintentionally awakened the crypt guardians.  As the knights in their plate armour patrol the corridors, the jungle birds have started following the clanking sound, hoping to claim more metal.  In one of the jail cells, there is a ‘metal nest’ for the players to find, that gives away a means of diverting the birds and setting them on the Hellcrowns.))

The fight continues.  Hax’s songs embolden John who releases a flurry of crushing blows.  What the party think is a ghost carrying a halbard finally reaches them.  As they turn to fight it, the gelatinous cube engulfs Hal.  Taken utterly by surprise, he struggles to find his breath, Hax tries to free him only to be caught himself.

The Emperor Bird appears in the corridor, behind the Crowns, and fans out its tail in a slice of knives.  John downs the second Hellcrown, leaving the final knight to defend itself against the bird.  John looks back at his friends.  Hal is now unconscious and dying, Hax is fading himself.  On his first attempt John also finds himself engulfed.

John now realises that if he just attempts to get himself free, Hal will die (Hal is Dying 2). Instead, he has to attempt a power attack on the Cube with his guisarme. He manages a Crit, he drags his guisarme blade fully through the acidic mass, the cube is destroyed!

The team fall to the cold flagstone floor, covered in gel and remains … just as the loud clanging of metal on stone ahead signals the Emperor Bird has defeated the undead knight.  Lit only by the cantrip on John’s blade, the vicious bird looks to the team.  Hax, gasping for breath as he lays sprawled on the chill stone, manages to raise a hand and speak the word of incantation.  An acid etched knife blade, a moment ago held in the cube, telekinetically skims off the ground, through the air and strikes the bird in the face, killing it instantly.

Hax rolls back quickly to put his hand on Hal, who is breathing his last (Dying 3). Healing magic flows from the bard to the priest. Hal opens his eyes (much to the players’ joy and relief).

View all posts by Cambion Black